Russ is joined by Logan Bretschneider and Dan Fecteau to talk about the new Netflix film, Invader Zim: Enter the Florpus.

You can find us (and a number of other awesome podcasts) on the ACPN family of shows.

The Emerald City Video Podcast is a periodic podcast hosted by entertainment journalist Russ Burlingame, with a rotating cast of hosts who used to work at the Emerald City Video store in East Syracuse, New York. The store was once awarded by the Video Software Dealers of America as the best small video store in the U.S. Though it closed in 2009, the store’s legacy still touches the daily lives of a lot of the people who used to work there, and the Syracuse community as a whole still has a lot of fondness for its memory.

The idea behind the podcast, which launched in 2016, was to bring the discourse you would get at a video store — talking with real humans about your movies, rather than trusting in an algorithm — back to…well, if not the world, or even Syracuse, at least to the guys who maybe missed that human connection the most: a bunch of pop culture junky loudmouths who used to run a really cool video store. Over the years, the Emerald City Video banner has flown over a number of themes, including specific episodes about TV series like Riverdale and Psych.

Be back for more by noon on the fifth day, and please — always remember to rewind your videocassettes.

So -- how does The Last Jedi hold up a couple of weeks down the line? Russ finds out by talking to Logan and Dan about the film.

It's OSCAR NIGHT! And the crew of Emerald City Video have decided to set up camp in Russ's living room and take a look at the favorite to win Best Picture tonight, La La Land.

Then to have a little palate-cleanse after that, Russ and Logan reconvene to record a look at The Blues Brothers. We all get drunk and review The Ring Vs. The Grudge

Russ Burlingame, David Nielsen ,Logan Bretschneider, and Dan Fecteau got together last Friday for a screening of Sadako vs Kayako, also known as The Ring vs The Grudge.

A good deal of alcohol was consumed, and we really only had the one microphone. So the sound quality is pretty awful.

But it was a lot of fun, and we got to really punch holes in what was, to be honest, a pretty terrible movie. And of course talk about other things that popped into our heads.

So listen in on our conversation, and we promise a more professional recording next time around...!

Dan, Logan, Dave, and Russ talk about Deadpool and The Punisher -- plus a whole lot of other stuff in one of our less-structured episodes. In this episode, Russ, Dan, Logan, and Dave look at Everybody Wants Some!! and Dazed and Confused from visionary director Richard LInklater. And we get distracted a lot.

WARNING: This is an incredibly explicit episode of the podcast. 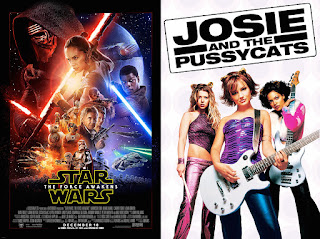 Also, if you haven't seen iZombie, Tapeheads, UHF, or Better Off Dead, you should rectify that immediately. The latter three would actually be great recommendations for anyone who liked Josie and the Pussycats.

Russ Burlingame
My Twitter handle is @RussBurlingame, and my Instagram is @Russ.Burlingame. I have a Facebook page where I'm verified, but if you're one of our old customers or co-workers and we aren't friends on Facebook yet, either look me up as Russell Burlingame or drop me a DM on the professional page if you want.
Daniel Fecteau
My channel is here:  https://www.youtube.com/user/MrAn0n3
Also Logan and I have a WIP board game channel here: https://www.youtube.com/channel/UCB7hh6gyJ1PEmxsQJTXZu-Q
Share | Download

Play this podcast on Podbean App