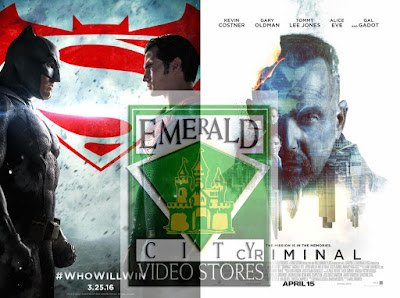 Hey, look! A new episode of the Emerald City Video Podcast is here (or really, HERE at Libsyn), with Russ Burlingame and Zach Roberts talking about two new theatrical releases.

Why all the changes from our formula?
Well, first of all, this is Episode 3. Episode 2? Still in editing.
Secondly, Zach and I are the only ones who had seen Criminal.
This episode, we talk about our feelings on Criminal, the new Kevin Costner movie from the studio that brought you Twilight and the writers who brought you The Rock.

If (for whatever reason) you want to see us talk about it, you can check out the YouTube link below. I'd recommend downloading the audio, though, because it's nearly three hours long.

Here are my notes on Criminal:

Given the fact that Criminal, Lionsgate/Summit’s new thriller, features a number of actors prominent in recent comic book movies, it might seem like the kind of film our audience would turn out for.
Ryan Reynolds (Green Lantern, Deadpool, RIPD, Blade Trinity)  is joined by Tommy Lee Jones (Batman Forever, Men in Black), Gal Gadot (Batman V Superman: Dawn of Justice, Wonder Woman), Kevin Costner (Man of Steel), Antje Traue (Man of Steel), Gary Oldman (The Dark Knight), Scott Adkins (Doctor Strange), Colin Salmon (Arrow), and more in what is ultimately a movie so bafflingly bad, it’s kind of incredible to watch it unfold.
First of all, Ryan Reynolds has already done this whole brain-swap-in-a-bad-movie thing, so I’m not sure how he fell for that trick twice.


It’s a bizarrely antifeminist movie. Coming at a time when big blockbusters are turning out Katniss, Negasonic Teenage Warhead, Wonder Woman, and more, Criminal delivers us a sequence of Kevin Costner’s character binding and mounting a woman with the clear intent to rape her.
Remember, folks, this is a character we’re supposed to sympathize with.
When he returns to that woman’s house later, she goes from “I’m gonna kill the guy who attacked me” to the poster child for Stockholm Syndrome remarkably quickly. She’s also kind of a terrible mom.
Alice Eve’s character is killed in a scene that means absolutely nothing, and later, Antje Traue’s character gets an incredibly brutal beating. Neither of these felt inherently antifeminist, because male characters got nearly identical treatment in similar story circumstances...but it’s worth mentioning because they both felt...gratuitous? Certainly it wasn’t a comfortable feeling watching those scenes.
All in all, I’d say the violence in this film didn’t really work. They couldn’t seem to decide whether they wanted to play it for laughs, to play it as “video game violence,” or to depict the very real consequences of the kind of violence they depict. The result is a film that does a little of each, and none of them ever feels quite right.
The whole movie feels like it would have been at home in the early to mid-’90s -- which is interesting because the writing team hasn’t had a major motion picture produced since 1999, according to their IMDb pages. Leaving aside that whole Ryan Reynolds/Ben Kingsley thing, this film feels like what would happen if Face/Off and Falling Down had a baby, and that baby couldn’t decide what kind of movie it wanted to be.
I went to see this film with Zach Roberts, a contributing photographer and videographer here at the site. He pointed out something that seems worth mentioning: this whole movie revolves around a small cell of (apparently American?) spies operating out of the U.K. There are Germans, Russians, and Americans having gun battles, car chases, and setting off terrorist attacks throughout London...with no visible presence from the British government at any point in the story. Do they even know what’s going on?

For that matter, does Langley? In the trailer you’re clued in that this is a CIA operation -- but I got through the whole movie and had to really scour my memory for any specific mention of what organization we’re watching this whole time.

You can see my review of both Criminal and Iris, which is referenced in the podcast, over at ComicBook.com.

Next up, we talked about Batman V Superman: Dawn of Justice. Both of us loved the movie, but since it's received mostly negative reviews and is on the receiving end of some truly toxic social media chatter, we spend most of our conversation defending it, or trash-talking some of the arguments against it.

That said, here's a small section of my copious thoughts, still in draft form, dealing with the negatives.